03/09/2012 Lesjöfors first invested in Latvia 8 years ago with the opening of a factory in Liepkaja producing stampings and strip components. The country was heavily affected by the 2008 global financial crisis but, since the stabilisation of their economy in 2010, Latvia has shown excellent growth, becoming one of the fastest- growing economies in the EU in 2011. 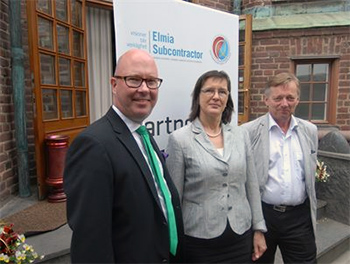 Capitalising on this success, Latvia will be the Partner Nation to the 2012 Elmia Subcontractor Fair in Jönköping, Sweden, the idea being to place the focus on a particular country with the aim of increasing knowledge about that country, thus promoting business for exhibitors and visitors to the show.

"For Lesjöfors, our business in Latvia has been essential for the whole Group's overall development in the world," said Lesjöfors CEO Kjell-Arne Lindbäck, speaking at a press conference at the Latvian Embassy in Stockholm. "When we made the decision in 2004 to establish production in Latvia, a favourable cost position was a contributing factor, but not what determined. The geographic location close to Sweden and the fact that there was qualified staff available weighed just as heavily.

"Overall, I see Latvia as a very interesting alternative for those who will locate production in a foreign country. For Lesjöfors, the whole business in Latvia has been very successful and has meant a lot for the good progress the Group has had and still experience"