25/06/2015 TEMOT International, one of the largest international trading groups within the automotive aftermarket, held their 2015 conference for shareholders and suppliers in Vienna from May 5-7. 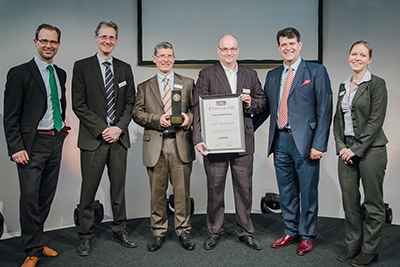 With shareholder members from throughout Europe and from across the world TEMOT International is a major international player with collective shareholder revenues totalling approximately € 7.4 B.

Lesjöfors were nominated by the shareholder members and TEMOT board members in several categories and were announced as Best Supplier for Sales and Marketing during the year 2014. Presenting the award, President and CEO of TEMOT International, Mr Fotios Katsardis, stated: “We congratulate Lesjöfors Automotive for the outstanding performance in 2014. They fully merited the award as they combined a professional approach to the market with a deep understanding of the customers’ needs towards their outmost satisfaction.”

Robert Glynn, Sales & Marketing Director IAM, Lesjöfors AB, received the award on behalf of Lesjöfors, together with Richard Küpper (MD Lesjöfors Springs GmbH), and stated: “We are delighted and very proud to receive such recognition from the members and the Board of TEMOT International and will continue to strive for excellence in all areas as supply partner to TEMOT International. We have excellent relationships and good business with many TEMOT International members and look forward to realizing opportunities with others during 2015 and beyond.”

Lesjöfors is a broad based international specialist spring manufacturing group with 21 production units in 10 countries across the globe. Lesjöfors IAM division is European market leader with dominant positions throughout Scandinavia, the UK, Germany and beyond. Revenues are at approx. € 186 M.

The prize was handed over on behalf of the TEMOT Shareholders by Mr. Fotios Katsardis and the TEMOT International Business Development team.